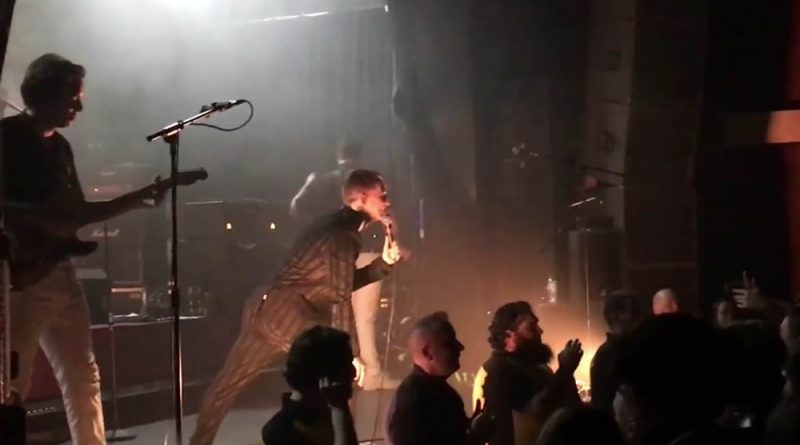 I know Frank from the old Gallows days and apart from his cover of Ruts DC Staring At The rude Boys I didn’t know much about his new band The Rattlesnakes. It was a bit of an epiphany to be honest. Not so much the music – pretty raw visceral punk that strayed in to hardcore and American style Green Dayism and My Chemical Romanticism. Not my cup favourite kind of music to be honest. What got me was how much fucking energy he expended on stage. Frank, in his double pin stripe suit looked dapper like a 21st century Artful Dodger with his Cockney twang. This he mixed with modern rapper style chest beating as he got all dewy eyed about the reception he was getting from the sold out crowd.

Apart from gobbing on the stage every five minutes his presence was something to behold. An elastic energetic boxer, throwing himself around with abandon. Launching in to the mosh pit, stage diving and crowd surfing and at one point doing an Iggy, walking on the crowd’s hands below.

Playing most of his new album Modern Ruin and the best bits of 2015’s Blossom he completely dominated this crowd. He had all the girls crowd surfing at one point, warning all the men in the audience not to touch them inappropriately. He thanked everyone in the audience, the bar staff, organisers right down to the cleaners. Was it all a bit overdone – this humble Cockney, maybe, just a little bit.

Final track – “This song is for you, to show you my appreciation of all of you………. you know what’s coming! ……….I Love You” before launching in to I Hate You! – see video below.

All words by Nigel Carr©. More writing by Nigel can be found on Louder Than War on his Author’s archive. You can find Nigel on Twitter and Facebook and his Website