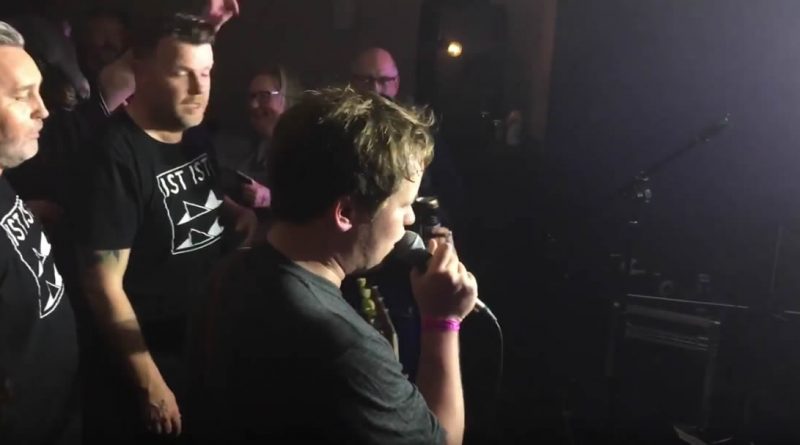 I have written quite a bit on Ist Ist over the past year or so over on Louder Than War so just thought I share a few words on my own site for a change! I arrived late to the gig which earlier had featured Crosa Rosa and La Bete Blooms. I can only apologise to those two bands for not catching their sets. The gig was hosted by Scruff Of The Neck records who have been putting on some amazing line-ups across the UK this year.

The Peer Hat is a small venue just off Stevenson’s Square in the Northern Quarter which has become the band’s spiritual home. It’s a new basement bar and is being developed in to a larger venue upstairs. I spoke with the barman who told me that they were originally going to leave the walls whitewashed like The Soup Kitchen but had decided to go for a cleaner look. I’d toddled up there with my brother Ian who since hearing the band late last year has also become a big fan.

Ist Ist are quickly growing into one of the must see Manchester bands. You can watch the videos and hear the tracks on CD or Spotify but nothing compares to seeing them live!  They combine simple straight forward yet infectious melodies with Adam’s rich if slightly quavering vocals, over Andy Keating’s thumping bass and Joel Kay’s bullet fire beats. The excitement in the audiences these days is palpable with their driving music revving the crowd up in to fever pitch. The dark, visceral intensity of their music doing its dirty work!

The band take to the corner of the bar which has been given over as the stage area, and launch in to pretty much the perfect set.  All of their recent run of singles is present including the haunting White Swan, the epic Silence, Night Arm and current release Strangers, which Adam precedes by a little crooning; ‘Strangers In The night, exchanging glances, strangers in the night’. This frivolity is actually pretty rare at an Ist Ist gig let me tell you. It usually feels quiet dark and dangerous, but tonight the band is on top form, the lads just enjoying themselves.

Halfway through the set, clearly faux fucked off with the bands comparison to Joy Division they break into JD’s Digital with Adam flailing his arms around Curtis style. ‘Cause we sound like Joy Division don’t we? don’t we? the singer shouted, laughing at the same time.  There are a couple of guys in the audience wearing large rat masks and of course only those in the know get what this is all about. Between tracks everyone is shouting ‘Rats Rats Rats’ and come the final track we get what we have been waiting for. The utter mayhem that is, erm… Rats! It’s pure unashamed one chord wonder-punk with Adam’s thunderous ‘Take me down beneath the streets, life in this city rarely sleeps’ before launching in to the single word chorus! The mosh pit exploding before the singer wanders off the stage to walk amongst them. (Check out the video below – oh and be careful of the strobe lighting).

The band is taking a bit of a hiatus from playing in Manchester. Adam told me that they are trying to break out of the city and play some dates further afield. Go and see them live if you get the chance. They have released a number of tracks on streaming sites along with strictly limited CDs of their last four singles so have a listen. In my opinion they are all great, not a dud amongst them. Fantastic music, but played live it is just another level!