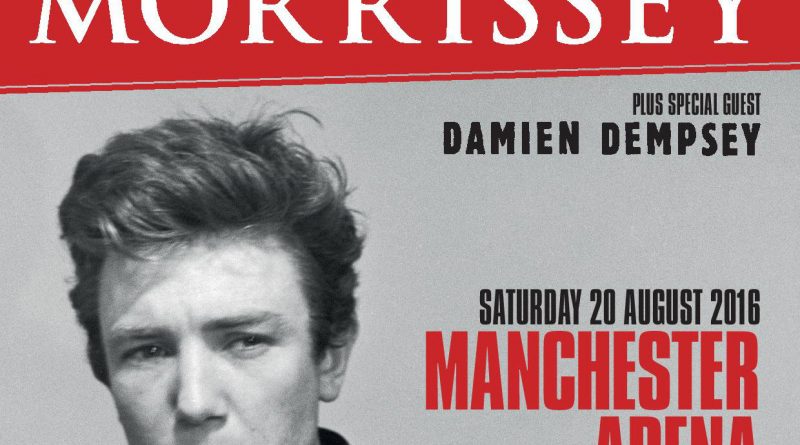 Morrissey was at Manchester’s Arena on Saturday night 20th August, Nigel Carr was there for Velvet Donkey and reviews the gig below.

Under normal circumstances I wouldn’t have Morrissey on my hit list, especially at such a large venue. It does have a habit of making the gig very impersonal, the huge hall, so many people, I would much rather be sweating it out in a small club. Fans had travelled from far and wide as this was the only UK gig he would be playing this year. He also missed Manchester out during his 2015 tour so I guess it made the whole event that bit more special. Speculation after the event had it that this would be his last UK gig ever, but I’ll believe that one when I see it.

What struck me was the huge number of young people in the audience wearing Moz and Smiths T’Shirts, one guy next to me spent the whole gig on his mobile phone, watching little of the action and part way through buggered off, returning with another Morrissey T’shirt that he promptly put on. He continued to completely ignore the what was going on right until the end. It does make me question quite why some people go to all the effort of going when they have no interest which made me think that maybe the cult of Morrissey is more attractive than the actual music for some people.

Morrissey hit the stage to a thundering, rolling drum solo that ended like the start to a Rank film, a huge crashing gong and straight in to Suedehead. You could see the whole crowd moving forward in the standing area like a tsunami, pulling in tight to the stage. This left no room whatsoever for all the photographers who turned up to document the show, they were left in the sidelines shooting from afar.

Highlights of the evening for me included Meat Is Murder with its sickening video backdrop of the Peta video, Meet your Meat. It kind of turned my stomach and I had to look away but the track itself just careered onward and ended in a huge crescendo of sound before spluttering to a close. What you get with Morrissey and indeed most of The Smith’s songs is this depressing mix of chords and descending scales that normally are impossible to listen to for more than five minutes. Combined with the visuals though, with the main man on the stage made for a compelling evening.

He played a set that mostly consisted of 2014’s World Peace Is None Of Your Business and filled the rest with carefully selected tracks from his other albums. For me there were too many marginal tracks and too few Smiths’ songs to really nail it. He missed out  some essential classics. Where was Please Please Let Me Get What I Want, where was First Of The Gang? big, rock solid tracks omitted in favour of at least half of the last album?

Whatever. He also managed to upset quite a few people with his rants, anything from the local Mayor to David Bowie. Those speeches in full below.

This was not him calling everyone a ‘bastard’ – it’s short for ‘bastanza’ in Italian which means ‘enough/stop’and is also a Spanish word meaning the same thing.

Before All You Need Is Me

Morrissey sings a short verse from Gracie Fields’ Sally: “Don’t ever wander, away from alley and me…”

Before You Have Killed Me

“So many songs, so little time.”

Before Wold Peace Is None Of Your Business

Before Kiss Me A Lot

Manches… “New ways, there are new ways to run the world.”

Thank you, thank you… I would like to apologise to all the people who are watching me on the big screen because I usually don’t look this bad, I,  I usually look much worse, I count myself lucky, it’s a good night.”

“Oh, my point, my point being that they have just elected a new mayor of Manchester and he’s, he’s very nice, he’s from, he’s from Liverpool,  and, and no, no, no, nobody asked for my opinion, did they ask for yours? well I just wonder why they didn’t find, somebody from Manchester! who, where is Alf Roberts.”

Before Every Bullfighter Dies

Before Meat Is Murder

Before I will See You in Far Off Places

I would like to express extreme love, extreme thanks to Damien Dempsey, a genius, a genius a genius and while were on the subject the finest platoon between here and the moon from Austin Texas, Gustavo Manzua, from Austin Texa Jessie Tobias, from Chicago Illinois, Matthew Irer Walker from East Los Angeles Emanuel Lopez and from the Old Nag’s Head, Boz Boorer.

Before What She Said

So your a bit tired so, so we will  stay until you wake up!

To which somebody shouted next to me ‘What about Bowie!’

Many years ago I released a song and the lyrics were ‘I’ve been dreaming of a time when the English are sick to death of Labour and Tories and now in 2016 they are. What ever happens I love you….

This was one great show for Morrissey, I say show because every part of it was perfectly choreographed, even the guy who invaded the stage from behind was probably set up . The speeches were very carefully put together.

That said I loved it, great tunes, great band. The sound wasn’t great because Arena gigs rarely are, but for me it was a jolly good show.