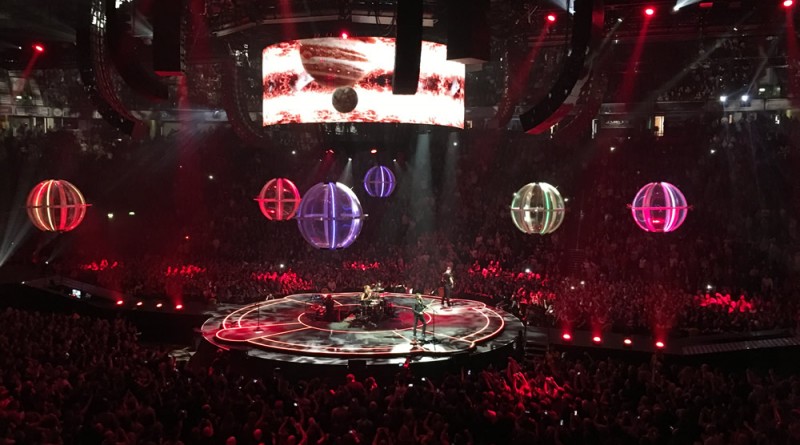 Muse hit Manchester last night on the European leg of their world tour which ends in The Netherlands in August. That’s quite a slog for the Devon trio, augmented by Morgan Nicholls on keyboards.

We finally get inside after queuing for half an hour for drinks, just as the band arrive on stage to a tape of Drones from the Grammy winning album of the same name. They quickly launch into Reapers which is outstanding for the amazing guitar work from Matt Bellamy. I never tire of telling people that Matt is the son of George Bellamy from The Tornados whose most famous hit was Telstar, a worldwide number one from 1963. The song was named after the world’s first communications satellite that was launched that year so it’s rather fitting that Matt has such a fascination with space and technology. He really is a talented guitarist, as good as anyone I have seen live, and those death metal bands take some beating I can tell you! His guitar has lights all down the fretboard that glitter and flash as he plays. The tech guys missed out nothing when setting this show up that’s for sure! 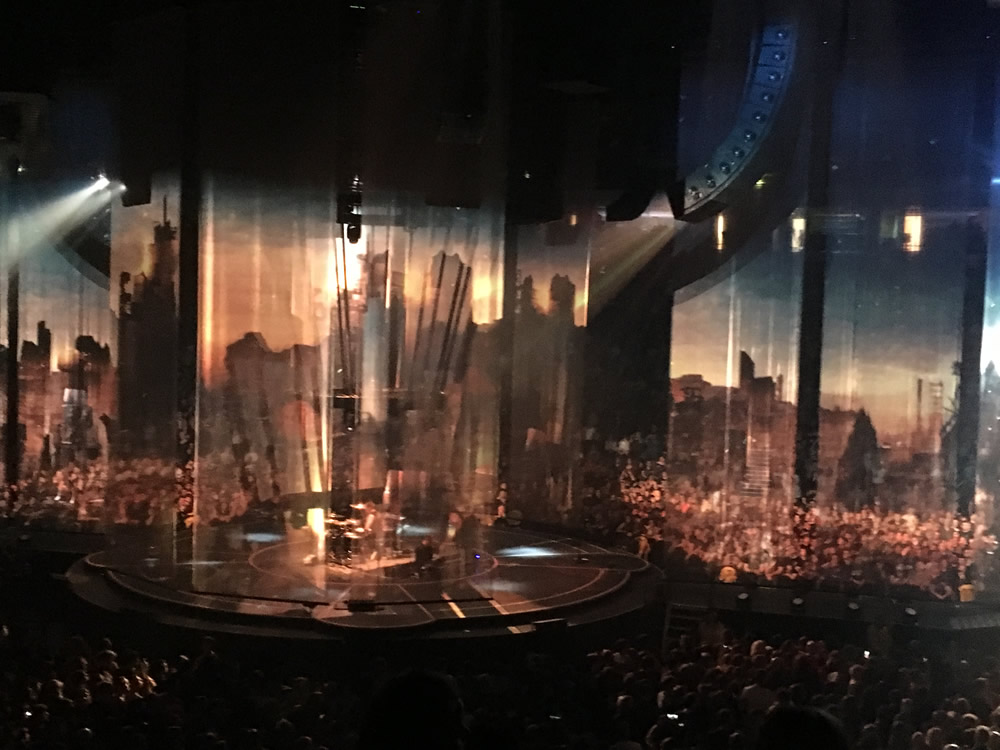 The arena is fitted with an enormous 360° stage in the centre with extensions running right across the huge floor space. The middle, with rotating videos on the top, is the same as the one U2 used during their 360° world tour in 2009 and suits the space perfectly. I saw Elbow a couple of years ago here and sat towards the rear of the hall but I was forever craning my neck to see the band. Having the stage bang in the middle makes it easier for everyone to see the full show from a closer distance.

And what a presentation it is! – huge balls which I guess are the ‘Drones’ themselves slowly moving around the hall, enormous fabric drapes hanging from the ceiling onto which are projected techy styled graphics which swirl around the space giving the impression of a 3d Imax type show. There are Flaming Lips style, enormous balloons bouncing over the standing crowds and at the end an explosion of confetti from the roof.

A true visual extravaganza of pomp rock – I can’t imagine how much all this must have cost but at £75 for a seated ticket and god knows what for standing, this performance alone would have netted over £1.5m and there are another 45 to go!

So what about the music? As a regular gig-goer I have been spoilt by so many up and coming bands in smaller venues that I don’t really know where to start. The thing is I used to love Muse. When Black Holes and Revelations came out ten years ago it really was the album of the year, almost faultless as a piece of music with some cracking tracks on it and I played it to death. I even got my brother Ian into it – it really was that exciting – fresh, load and vibrant and quite frankly it fucking rocked. 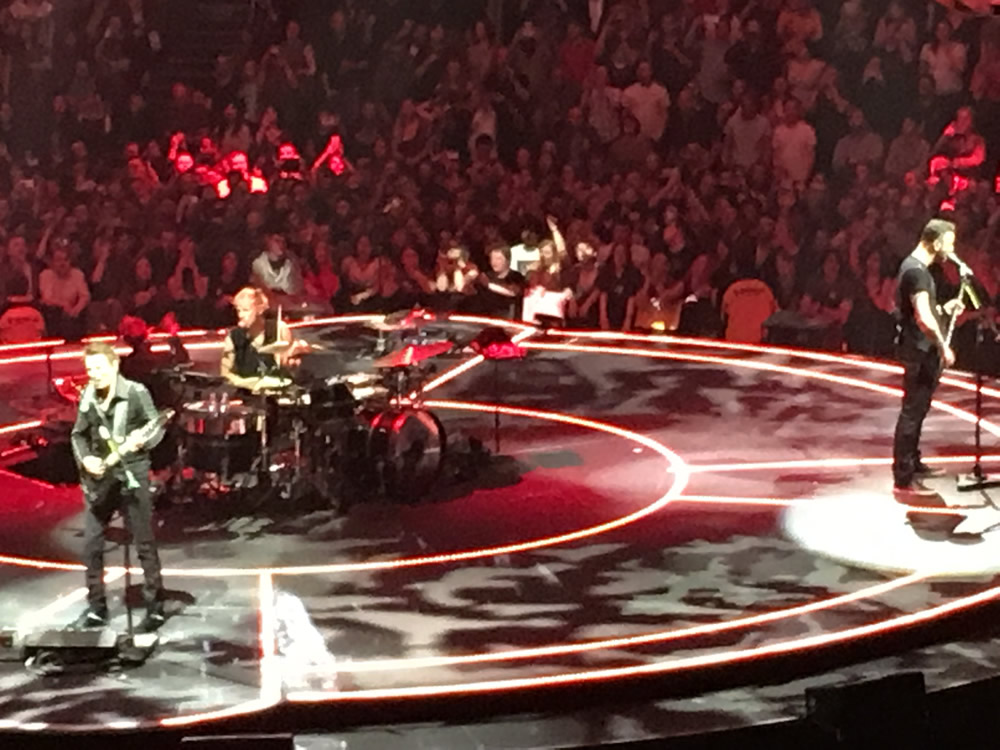 I explored previous tracks too like Plug In Baby which was also a proper tune. After that, though I heard nothing from them that I liked, it all kind of got too much, too anthemic and too pompous and all the tunes seemed to have disappeared. Half speed songs with fewer notes that were built into mini anthems. I didn’t want the guitar to hold a note for a whole minute before crashing into a crescendo of drums and splosh. I wanted tunes, tunes that I could sing along with, tunes that would stick in my mind as that album had and you know what? There weren’t any. They’d gone, Muse had gone off my radar because they weren’t making exciting, relevant music anymore.

And so back to tonight. The audience really only gets going when they recognise tracks from that album causing huge surges of emotion before falling flat as we have to endure yet another drum or guitar solo or some other bit of pyrotechnics. Don’t get me wrong, as I stated further up it is visually stunning – I have never seen such anything better but it masks something very deep and fundamental. The songwriting has declined to such an extent that it’s like watching the same tune played over and over again. Slower, quicker, solo, drums …… it is just so repetitive – and it’s two hours long! I mean songs like Psycho are OK but isn’t that line lifted from Money by Pink Floyd? And I’m spotting stuff in songs that I really shouldn’t! 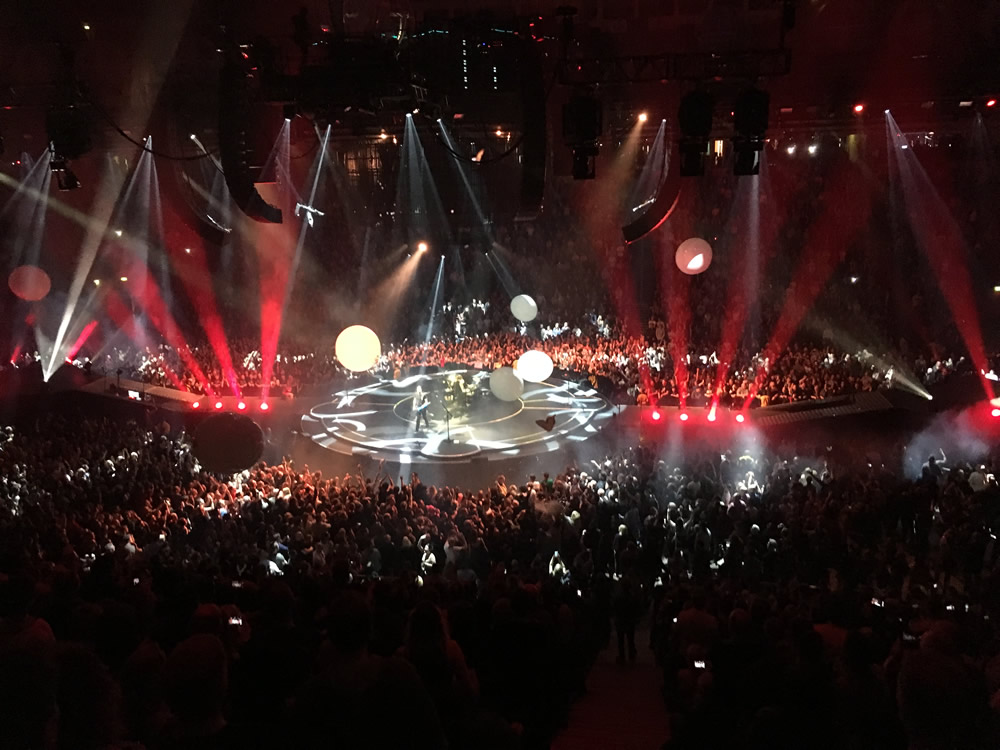 I really can’t write much more but I am guessing that a lot of the audience sniffed this as well. During Black Hole stuff they are dancing around, arms aloft, really having a great time, but the rest?, well they’re just standing around gawping.

The finale is amazing, an Ennio Morricone introduced Knights of Cydonia from Black Hole again which just explodes this 20,000 strong crowd and provides something memorable to take home.

I saw Florence in the summer of 2015 and she was just awesome. OK, not as visually exciting but the audience never let up as tune after tune sprung forth. It happened here tonight occasionally, but no where near to the same extent.

So was it worth it? On reflection, no, not for the music. The tickets with booking fee were over £83, I spent £5 on the tram and a further £40 on drinks. I can think of better ways to spend the best part of £130 to be honest. However – I went out on the town with my brother and my mates and we had a right laugh! My brother missed the last tram as he wandered off to buy a coffee – cue £30 in a taxi! priceless 🙂

All photos are copyright Velvet Donket© use of these photographs without permission is a breach of copyright – don’t be caught out – ask.