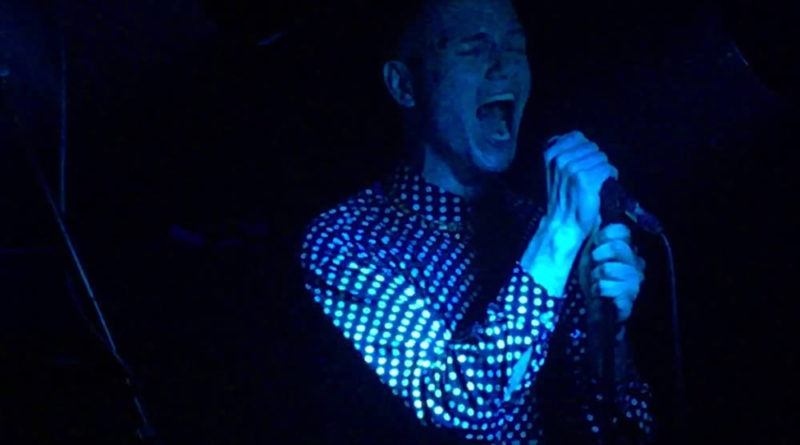 I was in Manchester reviewing The C33s for Louder Than War when Jacob Brailsford told me Shortparis were playing in the basement. They are an avant-garde/dance/post-punk outfit from The Russian Federation and have been smacking gobs up and down the country. I strolled into the venue as they had just started and report below for Velvet Donkey!

Jesus, I think I’ve died and gone to heaven! Only two songs in and Short Paris are producing the kind of original music this city needs to hear!

Russian in origin but the sound also has a Middle Eastern vibe. Part electro, part punk with a haunting almost operatic vocal. The closest I can relate it to is Lydon’s PiL’s on open up. Of course, I can’t understand a word but you don’t need to.

One track sounds like The Animals Went In 2 by 2 but quickly dives and twists into a menacing beat. The frontman wailing, marching, writhing, waving his arms around like a twenty-first century Ian Curtis meets the bald-headed assassin from the film Hitman.

With snarling intensity and an almost military beat, the sinewy drummer snakes his way across the stage arms held outwards, eyes focused on the crowd. The battery of beats and hypnotic chants take you to another level – the tremolo in his voice, incredible. Take ‘79 PIL and draw a trajectory forward 40 years, Chant, Poptones, twisted, bent, futuristic!

He opens one track with a cuckoo another, a whistle before the haunting wails kick in with the deepest of grooves! The singer pulses, slack like a dancing Thriller corpse being repeatedly shot, twitching, startled – feeling every note, every beat, thrashing around the small stage, arms flailing, punching – organic and intense.

He jumps into the crowd, chest beating before exiting at the back of the room… it’s all over.

This band is producing the kind of music that sends shivers up your spine. It’s like listening to the Pistols for the first time, Joy Division, The Blinders – those moments that you remember forever. I’ll never forget standing in that darkened basement listening to this twisted future. It was almost harrowing – the font man stood staring into the eyes of the crowd before disappearing through the door at the back of the hall – the band quickly following him. Simply stunning! You have to see them live.

Check out Страшно (Fearfully) – Nothing prepares you for them live!